Happy November, weirdos. October went by like a flash and we’re now on the holiday road.

The weather is getting cooler, the leaves are changing colors, it’s (apparently) tornado season in East Tennessee and countless desks at the office have bowls of leftover Halloween candy on top of them. That All Hallow’s Eve remnants are an early indicator of what’s to come: fried turkeys, stuffing, pies, cookies and eggnog. The holidays, baby! 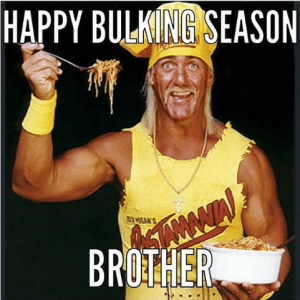 There’s a reason meatheads use the winter time as bulking season. We’re adding weights to the bar, layers to the wardrobe and fat to the gut. It’s arguably the best time of the year and I am hyped.

And I figured since we’re so hype — let’s do a good old-fashioned State of the Viking Freak Address, y’all!

What’s Up at TITLE?

With that hype comes the excitement that we’re fast-approaching the busy season at the gym. This month we’re doing ZERO enrollment at TITLE Boxing Club Knoxville (a $99 value) and each membership will come with a Power Punch Card that will earn members $25 in merch! We’re saving you $100 just for signing up and offering to give you another $25 just for bringing your friends to us. The only thing you have to lose is fat and poundage. All you have to is come see us!

With an influx of first-timers there’s going to need to be an influx in help at the club and it appears there’s going to be plenty of it … in Viking form! Without going into a lot of details just yet (because it’s not officially official) my presence at the club is about to be increased in the near future. It’s been a long time coming, if you ask me, but I’m definitely humbled by this opportunity and am ready to help our local club see its potential.

I’ve already started working on some new material for us so keep an eye out on both mine and the Club’s social media presence below:

To say the least, business is booming. When I started this side gig I didn’t think I’d have more than one or two clients at a time but I’m currently at a point where I’m basically fully booked going into the holiday season. I have one client that started out as a pretty poor boxer whose boxing skills and coordination have increased significantly; another who came in with the goal of being able to lift 150 pounds assisted but is currently deadlifting 160 pounds unassisted and for reps; another first-timer whose balance and flexibility has improved considerably in the short time they’ve trained with me; And now I have a new client with a goal of performing three pull-ups. I’m always super excited to help my clients achieve their goals — they’re the ones putting in the work, I’m merely counting their reps.

What About TITLE Classes?

I recently celebrated my third year as a TITLE trainer! I never thought that would be something I’d be into, let alone any good at. My club is well-known for being a franchise that keeps their trainers the longest. But even though we don’t have a lot of turnover, we’ve certainly seen our share of trainers that have come and gone.

Trainers don’t make it for a variety of reasons that include availability and general microphone presence, but I think the biggest reason trainers don’t make it is because they’re unable to grow. We’ll either get established trainers with egos that don’t allow them to change their approach or green trainers that are too afraid to step outside of their comfort zone. Personally, I assess my approach and my overall class structure frequently so I can know what’s working and what’s not. For the longest time, I felt like my core sessions weren’t challenging enough so I spent a lot of time revisiting that. Ultimately, I ended up introducing the concept of circuits into core and several of our trainers are utilizing them now, too. It’s been an easy change up that has helped us improve our core sessions overall and it’s also challenged our members in a fun new way.

I’ve started changing up my Boxing and Kickboxing classes in that they’re more build-up based. I’m a firm believer that long, convoluted combos are not the way to go so I write out shorter, easier-to-follow combos for my classes so they can focus more on their intensity and technique rather than remembering what the next punch is or when to slip or when to roll. We’ll often start with two strikes, then build up from there until we get for a 5-6 strike combination that they can get the rhythm of. My members have responded really well to this approach so I’m going to continue to evolve it.

I was starting to think my MMA classes were getting a little stale because I was often just recycling old classes that we’d already done several times before. I’d change the round format frequently just to keep things interesting but ultimately it was the same moves over and over. With that in mind, I’ve spent a lot of time recently studying more Muay Thai and Brazilian Jiu-Jitsu techniques and have started introducing rounds that are a little more drill-based. My last MMA class ended up being so intense that I gave us a half-speed warmup and we only stretched for core. There were no complaints!

What About Non-TITLE Stuff?

I can’t believe I haven’t talked about it but lately when I’m not working out myself or other people at the gym … or, you know, working at my full-time job (that still exists) … I’ve been studying. My PT certification is set to expire at the end of January so I’ve started a program to get me a Fitness Nutrition certification through NASM. The program will give me 1.9 of my 2.0 required CEUs (the remaining 0.1 will be earned when I re-certify in CPR) and I thought this would be a good route to take. I’m a big fan of nutrition, making meal plans, etc. But damn … this shit is HARD. I was warned from the beginning that this content was dense but I had no idea how much I had bitten off. Nowadays I spend my entire lunch break reading about carbohydrates, proteins and lipids; digestion, oxidization and enrichment. I’m about halfway through the program and I can’t wait to be finished. Mercy.

As I’ve already mentioned, it’s bulking season and I’ve already been putting away the holiday-friendly food. We’ve downed a month’s worth of pumpkin spice this and that — now I’ve got my eyes set on Thanksgiving and the weekend after when I can have my first shot of eggnog. With this in mind, it’s also time to lift HEAVY.

I’ve started a fight-centric program that encourages heavy lifting and explosive moves. I plan on detailing the program in the next couple of weeks but it’s a modification of a workout plan I found online that follows a 5/3/1 routine that hits front squats, deadlifts, incline bench press and shoulder press followed by explosive fight for cardio and flexibility work. So far I’m a pretty big fan and I’m seeing some satisfactory results.

What About This Site?

Okay, so I’ve all but abandoned this site but those days are hopefully over. I have a renewed interested in sharing the information that I’m learning and pairing it with the excitement of getting more into the marketing aspect of my club and a desire to tell my desk job and the yuppies that work there to shove it. With that said, I have plans to redesign this site, revamp the Weekly Thing series, re-launch the FFF series, share my 5/3/1 bulking program I’m currently on and throw in a bunch of other free shit, too, like meal prep how-tos, a holiday gift guide, a new year starter kit and some bomb-ass workout playlists.

This is equally the best and worst time of year, guys. It all depends on your focus and your goals. If you’re starting your winter bulk, then bulk away and lift heavy. If you’re on a weight-loss journey but are intimidated by the upcoming holiday feasts, just be smart, don’t stress and don’t skip that Black Friday cardio. If you’re doing either — or neither — the main focus is family, friends and enjoying your life. Don’t let your diet or exercise program change that.