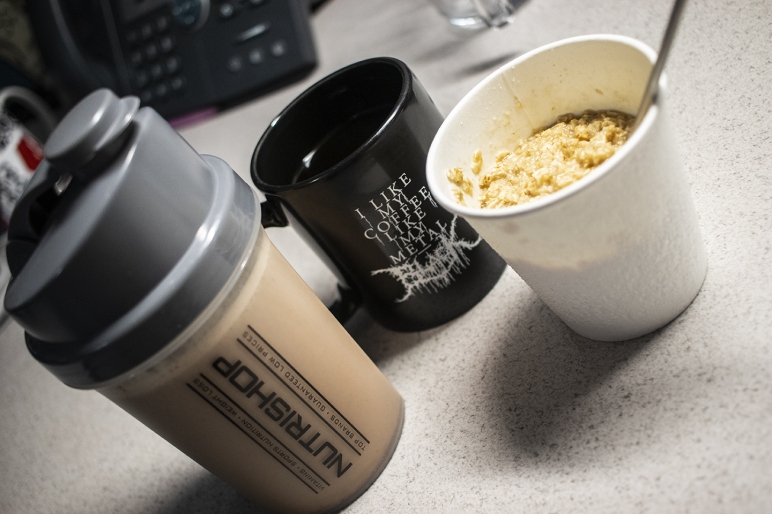 In the last week and a half, I’ve spoken with three people about their nutrition because they were having some issues with their weight loss goals and/or body composition. And in each of those cases the verdict was the same — people not eating enough. I know it sounds counterintuitive — I mean, aren’t we supposed to be eating less in order to lose weight?

Yes. But there’s more to think about than just eating fewer calories. More often than not, the average person doesn’t consider the possibility that they’re, indeed, eating too little to achieve their goals. Losing weight is great but if your body is losing muscle mass as a result of eating too few calories, then you’re basically withering away.

And I don’t want that for none of y’all. That’s one of the biggest focuses of this whole Mount Crushmore thing — to show you guys a (hopefully) good example of how to change your body composition without crash dieting or going to some freaky ass extreme. I showed you how to calculate your personal calorie requirement, so let’s freaking hit that mark, yeah?

This week’s meal plan isn’t a lot different from the previous one I shared. Honestly, for me it’s all about convenience. If I can eat food I don’t get sick of and have it cooked both quickly and efficiently, then I’m going to go for it every time. I’m also only changing my meal plan every two weeks so I can save even more time by not coming up with something new every week. 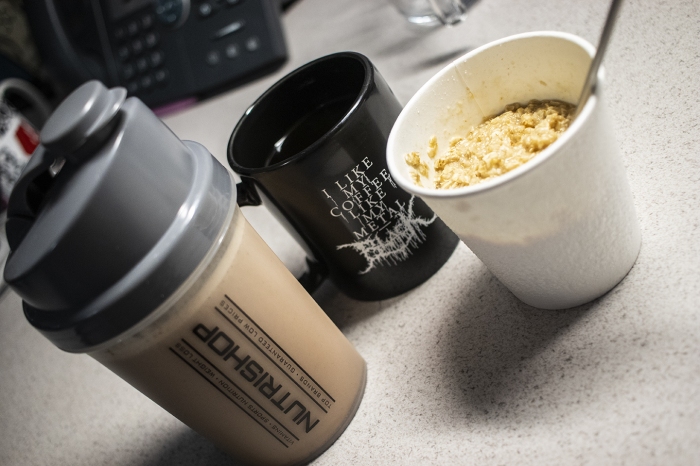 A lot of people have their meal plans derailed due to a lack of convenience. Most people feel like they don’t have time to get in a proper breakfast at home and opt to hit the drive-thru or skip it all together. I’ve never been a meal skipper and never will be. I also don’t really have the time to get in a proper breakfast at home so I choose to be prepared with a good breakfast at the office! This will be my breakfast every week for the foreseeable future. Oatmeal and whey protein are easy to keep at my desk and I know I’ve got a good, quality breakfast waiting on me every day.

What’s going on here is two packs of Quaker Instant Oatmeal that I mix with water and a scoop of Forazone whey protein mixed with water. I always start my mornings with two cups of black coffee as well. 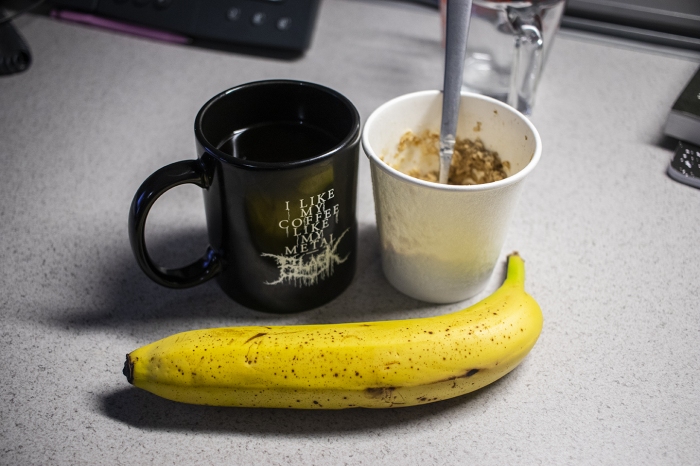 One more pack of Quaker Instant Oatmeal paired with a banana. Just a banana. Nothing too fancy here. 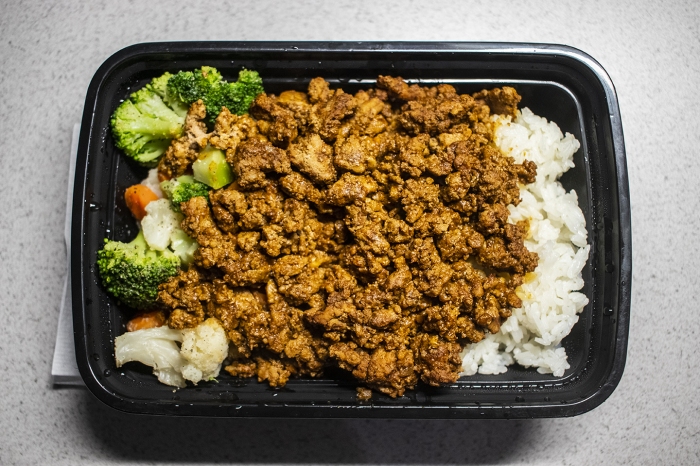 Changing lunch up just a little bit. I love rice so I keep it in my meal plan. Included here is 1 cup of steamed white rice, half a bag of mixed frozen veggies that I roasted with canola oil spray and spices, and about 10 ounces of lean ground turkey that I fried up with some low-sodium taco seasoning packets.

Getting in more quality carbs with another plain-Jane banana paired with a tasty cup of dry Frosted Flakes for my afternoon sweet tooth. 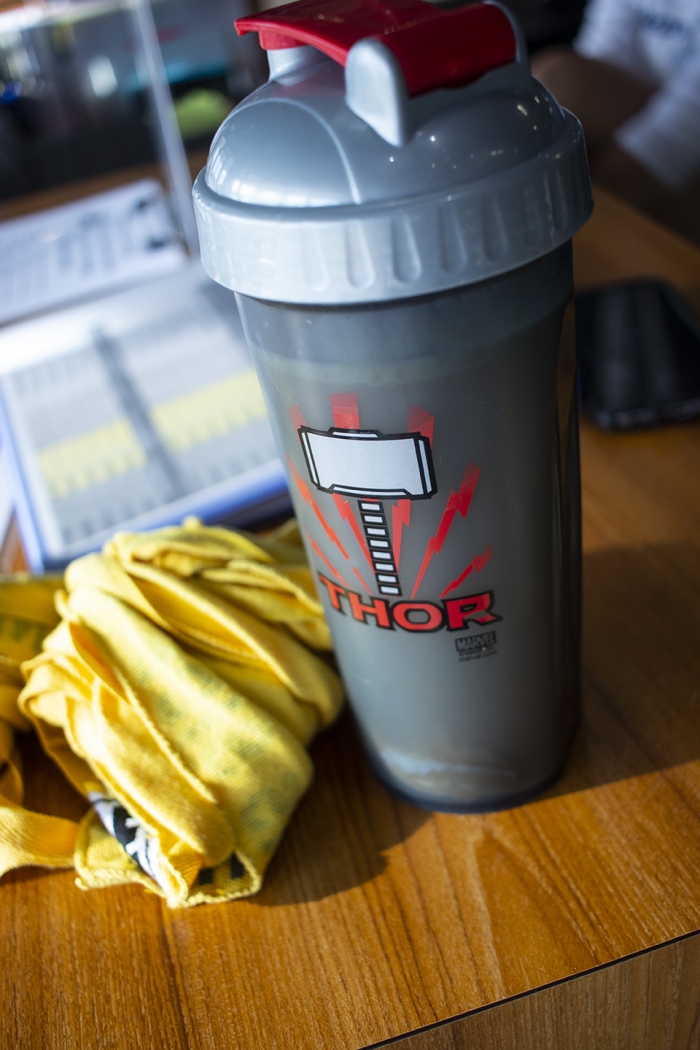 One more scoop of protein but this week we’re mixing in about 5g of creatine. 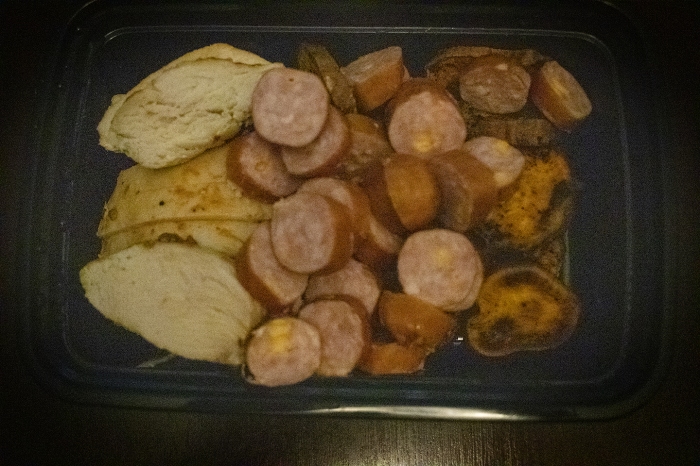 Tornados surrounded towns all around Knoxville on Sunday and while we were fortunate and didn’t get hit, the rain and wind that kept turning themselves off and on again kept me from firing up the grill. That didn’t stop me from getting some barbecue chicken into my meal plan, though!

What’s going on here is about 10 ounces of baked chicken that I basted with some fancy-pants Heiz bbq sauce (I don’t remember the exact kind but I used very little sauce), 6oz of roasted sweet potato rounds that were topped with a variety of spices and two links of Johnsonville “Beddar with Cheddar” cheddar-stuffed sausage. 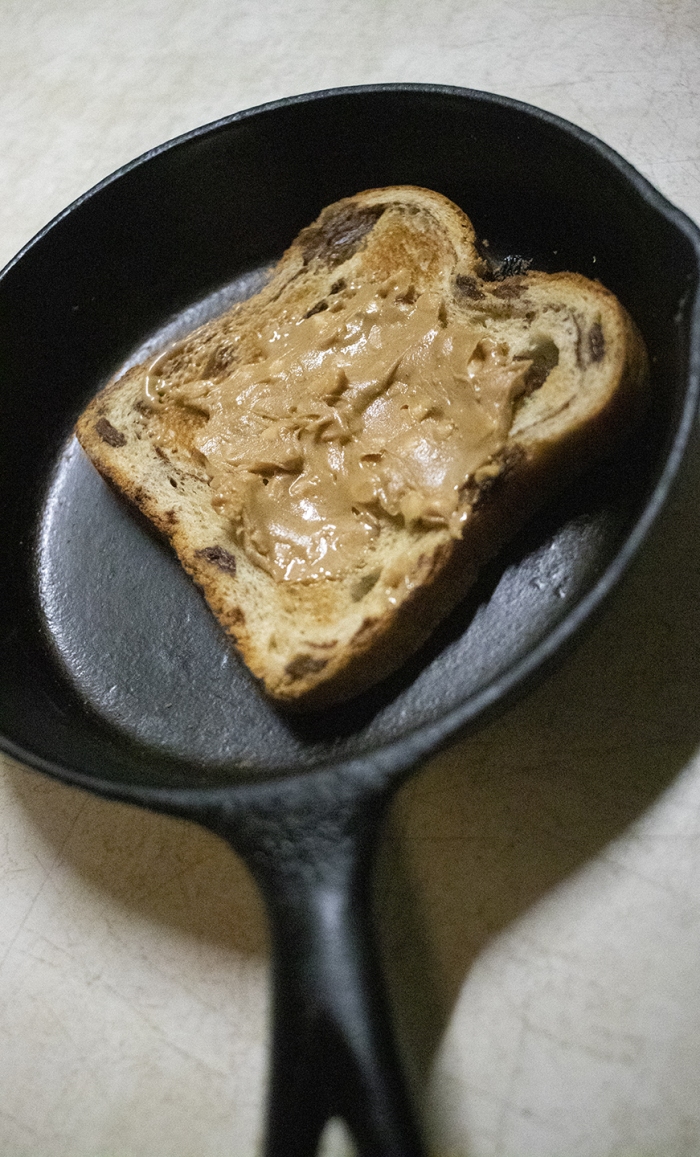 You guys know I love my bedtime snack. I brew up some decaf, cuddle with my girl and chow down on a warm, sweet snack. This week I’m topping a single slice of Pepperidge Farm Swirl Raisin Cinnamon toast with 2 tablespoons of Target brand extra-crunchy peanut butter.

If you’re into that kind of thing, here’s how the meals stack against my calorie/macro requirements:

Carbs are up and fat is slightly down from the last meal plan but the calorie deficit is still roughly about the same. Like I’ve said before, these numbers are there to help you reach your goals but as long as you’re pretty close, you’re good. No reason to stress about a handful of grams or a hundred calories (or in this week’s case, 10).

So that’s this week and next. What’re y’all eating?